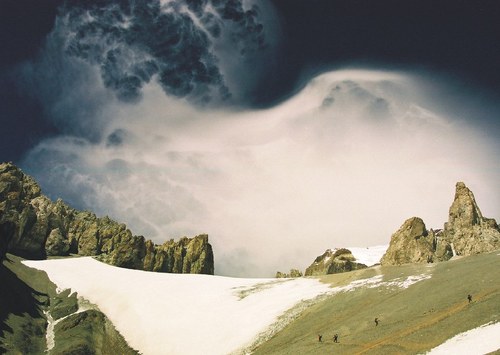 Aconcagua is the highest mountain in the western hemisphere at 22841 feet (6962 m). It is located in west Argentina, near the Chile border. Aconcagua is a gigantic mass of rock, not picturesque in the traditional Alpine sense, but magnificent by its size alone. It dominates the sky west of Santiago; Chile's capital city. Though the mountain's summit crest and radiating ridges are largely windswept free of snow, large glaciers fill the valleys on all but the southern and western flanks. Some climbing routes are relatively straightforward hikes to the top, but this is the very reason that Aconcagua has one of the highest mountain death tolls in the world: It is a popular mountain, and many of its climbers tend to move too swiftly up the mountain, with little respect for the elevation or the weather which, on Aconcagua, can quickly become severe.

In welchem Monat gibt es am meisten Schnee in Aconcagua?

Hello, I would like to share my experience with you, my name is Nicolas, I turned 25 during my climb of Aconcagua. I shared my birthday with some of the most incredible people i've ever had the pleasure to meet. People from all over the world who in no other circumstance would find themselves together. The kitchen staff managed to bake a cake for me and we celebrated fully.

There were of course highs and lows and on reaching the 6000 metre mark I was faced with my a difficult question and to go up or to go down. With the support of my amazing guides and team... I was able to reach the summit and also help others to get to the top.

It is an adventure that should not be underestimated... but for the brave who venture, you will be rewarded with views you've only seen in films and return with an energy that will see you succeed in so many other factors of life.

The organisation that Aconcagua Expeditions provided allowed me to completely leave the world for 3 weeks to focus on this one thing. A challenge so pure, so honest, so difficult and so enjoyable that I cannot recommend it enough.